It is time to continue with this electrifying, extremely passionate series that has had me fall in love with each of the Wild boys countless times as I have read their stories. They may have fallen in the love with other people in these stories but that does not mean my feelings toward them will ever falter lol.

If you are just joining in on this amazing blog tour which is being hosted by Tasty Book Tours, then I strongly encourage you to check out my first blog tour post focused on the first two books of the series here. If you are returning to see how much I enjoyed the final two books in the series, then welcome back! I will gladly say that the final two books did not disappoint whatsoever which is why this overall series has been so addicting. Stay tuned to hear more about Jackson and Cooper’s stories.

Receiving a marriage proposal is supposed to make a women happy, but when Erica Lane receives a beautiful marriage proposal from her perfect boyfriend on the eve of her annual camping trip with her best friend, Jackson Wild, the first thing she does is jump into bed with Jackson.

Jackson’s all too happy to screw the annoyance out of Erica. After all, they’ve always screwed the hell out of each other when they were bored or angry, lonely, or too damn drunk to see straight.

But the marriage proposal changes everything, and their annual camping trip takes unexpected turns. Will a few nights in the wilderness set these friends with benefits free, or lead them on a path of destruction? 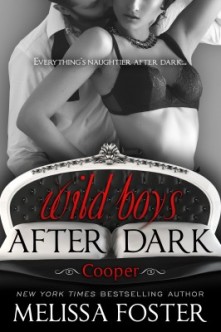 Four years ago at a film festival, Cici Fine met Cooper Wild, a man who turned her world upside down in the span of one deliciously perfect week. He was everything she’d ever dreamed of: sinfully sexy, intelligent, and incredibly loving. When the festival ended, they returned to their own hometowns with promises of forever. But Cooper disappeared, and Cici was left to raise the daughter he never knew about alone.

Cooper is finally thinking straight after years of being lost in grief from the tragedy that killed his father and left his mother blind. Now he’s on a mission to find the woman he left behind—the only woman he’s ever loved.

But Cici Fine is no longer a naive young girl. She’s a savvy businesswoman with big responsibilities, on the cusp of a life-changing move. When fate brings the two together, they’ll put the old adage to the test and find out if love really can conquer all.

Melissa Foster is a New York Times & USA Today bestselling and award-winning author. She writes contemporary romance, new adult, contemporary women’s fiction, suspense, and historical fiction with emotionally compelling characters that stay with you long after you turn the last page. Her books have been recommended by USA Today’s book blog, Hagerstown Magazine, The Patriot, and several other print venues. She is the founder of the World Literary Café and Fostering Success. When she’s not writing, Melissa helps authors navigate the publishing industry through her author training programs on Fostering Success. Melissa has been published in Calgary’s Child Magazine, the Huffington Post, and Women Business Owners magazine.

Melissa hosts an Aspiring Authors contest for children and has painted and donated several murals to The Hospital for Sick Children in Washington, DC. Melissa lives in Maryland with her family.

Visit Melissa on social media. Melissa enjoys discussing her books with book clubs and reader groups, and welcomes an invitation to your event.

Click the link below to enter into the giveaway:
a Rafflecopter giveaway

Jackson Wild and Erica Lane, or Laney which is what Jackson calls her have known each other since high school. Their friendship with one another has been a stable thread throughout their lives, caring about one another through each of the hardships they have both faced as well as trusting each other wholeheartedly that they would get tattoos linking each other to one another for the rest of their lives. That trust can also be seen in the friends with benefits relationship they have also had since high school. This almost unconventional relationship has continued to last even now when Laney is in another relationship with a man who is comfortable with what she and Jackson are doing because he believes that one day she won’t need him in that way anymore. Jackson and Laney rely on the natural flow of their relationship, coming together in fits of passion whenever the other person felt or needed it but that relationship is threatened to cease to exist the minute Laney’s boyfriend, Bryce, proposed to her during her birthday dinner. It is this jolt of reality that Laney might actually have found the person who can give her what every woman wants: a loving marriage and down the road the start of creating a family with that person, that cause Jackson to realize that his feelings for Laney are more than just of the friends variety.

I will say that this is the first time I have read about a relationship like Jackson and Laney’s where not only have they known each other for over ten years but for those ten years they have been engaging in a friends with benefits relationship with one another. As I have said above, this relationship seemed very unconventional to me only because most relationships that I have read about that decide to do the friends with benefits thing between one another have usually just met. The fact that these two know each other so well being best friends and all definitely brought an unexpected yet wonderful element to the story. I mean they have continued this relationship even when Laney has had boyfriends like the one she has in the book who decides to take things to the next step and propose to her. And to top it all off, Laney has told her boyfriend, Bryce, about her relationship and/or arrangement with Jackson and he was fine with it because he believed it would end and he would therefore take over from there. What Bryce did not bank on was just how much of a connection Jackson and Laney have no only as friends but as lovers. The shock of the engagement brought both Jackson and Laney to re-evaluate their friendship/relationship with one another but it was obvious from the very beginning that they were meant for one another. There was just so much heart and love for one another even if both were denying it a little bit that you could not help but latch on and ride out the story with them with the hope and anticipation that they would finally realize what they have is truly magical and not something they should let slip away.

Based on how quickly the other Wild boys have fallen in love, it is no surprise that Cooper Wild hopped on that train as well the minute he laid eyes on Celeste “Ceci” Fine at the Bay City Film Festival. Within a week, the two were so wrapped up in one another it seemed like they had known each other for forever. Life for Ceci seemed perfect until Cooper ended it abruptly and left her. Her world came tumbling down from the paradise she was in until she found out she was pregnant. After trying to reach out to Cooper to tell him about the baby for almost a year with no response on his end Ceci gave up and focused on raising her daughter whose brilliant blue eyes reminded her of Cooper and the amazing week they had each and every day. Little did Ceci know that the night that Cooper left her and ultimately ended things was the night his parents were attacked in their home which resulted in the death of his father and his mother becoming blind after taking a horrible beating from the attacker. The attack left Cooper with a mix of emotions as he tried to wrap his head around what had happened and come to terms with the outcomes. Dealing with the tragedy left Cooper numb as a part of him died the day his father was murdered. It wasn’t until his brothers more specifically Jackson found love that he was pulled out of that fog his thoughts now focused on the women he had fallen in love with all those years ago before his life was turned upside down. Now back at the Bay City Film Festival where they both met, Cooper is ready to win Ceci back while Ceci is just trying to move on with her life for herself and her daughter before they move to New York City to start their new chapter. Of course, life had other plans causing them to her to come face to face with the man her consumed her thoughts over the past four years as she tried to move on and raise their daughter.

I was so happy to have a story that involved a pregnancy within this story because not only are they some of my favorite stories to read about but also because it rounded the series as a whole bringing a whole other element amongst the ones that have already been told in the other books. After reading about how sustaining and powerful Jackson and Laney’s love was for one another overcoming the obstacles in front of them, I had no doubt that Cooper’s and Ceci’s relationship would be just as all consuming as it was before even after four years. I mean even after they reconnected in her hotel room when Ceci had every right to be furious about how Cooper left her they still were so drawn to one another that it is as if time never past. The reminder of how love never falters even after four years of total silence was so remarkable for me especially after seeing how much of an impact it had on Jackson and Laney’s relationship even when they were in denial that it could actually work between them beyond the parameters of just being friends with benefits. The sustainability of love that weaves through both of these stories was so refreshing to read about making me love them and this series so much more.