A captivating new sexy standalone romance by New York Times bestselling author Melissa Foster.
Special Forces veteran and Dark Knights Motorcycle Club member Bullet Whiskey lives to protect his family, their bar, and the residents of his small hometown. He’s rough, unapologetic, and haunted by a secret, painful past. He’s also a master at keeping people away, and when his sister hires gorgeous and sweet Finlay Wilson to help expand their biker bar, he knows just how to get rid of her.
After losing her boyfriend and her father, Finlay moves back to her hometown to be closer to the little family she has left. She needs her temporary job at Whiskey Bro’s to get her catering business off the ground, and she’s determined not to let the gruff, arrogant mountain of a man Bullet Whiskey scare her off.
Finlay is everything Bullet has never wanted. She’s afraid of his dog, afraid of motorcycles, and sweet enough to give him cavities, but as she weaves her way into the hearts of everyone around him, he’s powerless to resist her charms. Passion ignites, but trust doesn’t come easily, and when their pasts collide, Bullet finds out the true meaning of protecting those he loves.

FINLAY SMILED AND waved as she slipped into the dingy bar. “Hi. Am I interrupting?” From the scowl on Bullet’s face, she was not only interrupting, but she’d somehow pissed him off. Well, good for him. Let him be angry, the big, tattooed bully. What kind of man comes up to a woman at a wedding and says, Hey, sweetheart, whaddaya say I take you for a ride on the Bullet train?

She smoothed her sundress over her hips, trying to gather her wits about her. Bullet train. She had no doubt he had a train in his pants. The man was larger than life in too many ways to count, and when he set those cold, dark eyes on her, she swore they ignited right in front of her. Lordy, now my pulse is racing. She’d been thinking of that flash of heat ever since the wedding, and she couldn’t deny that it scared her and turned her on in equally frustrating measures. If she were honest with herself, she’d thought she was too damaged after losing Aaron to ever feel this type of spine-tingling excitement over a man again—and the fact that she felt it around a guy like Bullet scared the heck out of her. But this was not the time for honesty. She needed to pull herself together so she didn’t make a bad impression.

Dixie pushed past her massive brother to greet her. “Not at all! I’m glad you made it in.” She gave Finlay a quick hug and then glared at Bullet. “Right, Bull? Aren’t we glad she made it in?”

He lifted his chin in a half-cocked greeting before stalking around the bar and busying himself pulling bottles from shelves. Was he upset that she’d refused his magical penis ride? If so, he was going to have to get over it, and fast.

“Don’t pay attention to him. He had a rough night.” Dixie waved a hand as if Bullet didn’t matter.

Finlay forced a smile, knowing the big oaf mattered a heck of a lot. She’d grown up in Peaceful Harbor, although she was several years younger than the Whiskeys and she hadn’t known them then. She’d moved back into town two months ago, hoping to put down roots near her sister, Penny, after leaving to attend college in Boston nearly a decade ago. Penny had filled her in on the Whiskeys when she’d accepted the catering job for their friends’ wedding. Apparently, the Whiskeys and their motorcycle gang owned her small hometown. Only, according to Penny, it wasn’t like the stories she’d heard about bikers causing a ruckus or scaring people. No, the Whiskeys were known to be good folks, and apparently their gang was more of a club. She didn’t know the difference, but understood that they protected the community, keeping crime down and helping with bullies—except, apparently, for their own big, pushy son. From what Penny had said, they might look intimidating, but beneath all those tattoos and dark leather, they were kind, caring, generous people. She’d noticed that at the wedding, and in the weeks since, as she’d seen Dixie, her other brothers, and their parents around town. They were all as nice as could be. The jury was still out on big, bad Bullet.

But if she was going to spend any amount of time in his presence, he needed to respect her. This was why Penny had pushed her to take this job, wasn’t it? Because she’d been hiding behind her past, living a safe, comfortable, lonelylife for so long she’d all but forgotten how it felt to be hit on? And how to handle it. Well, that ended now. She straightened her spine, the way she’d learned to do in culinary school, when top chefs came in to teach and they’d ream the students for the smallest errors. There was no room for thin skin in catering—and she’d be darned if she’d let Bullet Whiskey intimidate her one bit.

“It’ll be fine,” she assured Dixie, and walked directly behind the bar to the mountain of a man who was trying his best to ignore her. Every step made her heart beat faster. Holy moly, she hadn’t remembered him being that tall. She was only five three, but even though she had heels on, he was well over a foot taller than her.

She reached up and tapped Bullet’s shoulder. It was like tapping stone covered with a black leather vest. He turned slowly, his broad chest and massive arms suddenly taking up all the extra space. She stared up at him. His dark beard and eyes gave him a menacing look. She swallowed hard, steeling herself to say her piece. In the next second those angry eyes turned even hotter and hungrier than they’d been at the wedding.

Oh boy. She was in way over her head. This man probably got everything he wanted from women with that look. He cast some sort of spell with his leather wrist cuffs, scary-looking silver and black rings, and go-ahead-just-try-to-mess-with-me attitude.

Forcing her sternest expression, she said, “Bullet, if we’re going to work together, I expect you’ll let what happened at the wedding go and get behind me on this project.”

He cocked his head, his lips curving up in a wicked smile that brought goose bumps to her entire body as he said, “I’m happy to get behind you anytime, sweetheart.” 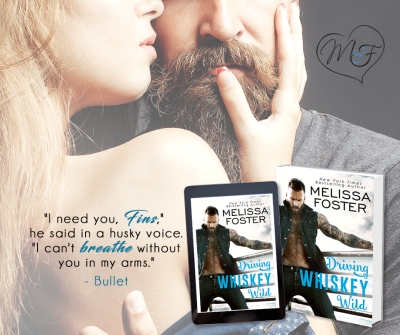 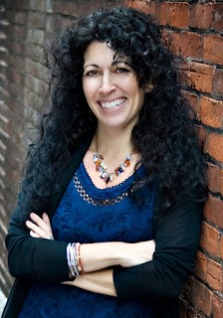 Melissa has painted and donated several murals to The Hospital for Sick Children in Washington, DC. Her interests include her family, reading, writing, painting, friends, helping others see the positive side of life, and visiting Cape Cod.

Melissa is available to chat with book clubs and welcomes comments and emails from her readers. Visit Melissa on social media or her personal website. Get 5 eBooks FREE >> www.MelissaFoster.com/LIBFREE

Have you ever read a book and know that one of the characters will stay with you forever? Well, Bullet Whiskey is one of those characters for me. He is a force of nature with a huge heart and not only did he capture Finlay’s but he captured mine as well. Plus, if I’m going to be honest, I took one look at that cover (😍😍) and knew I was going to love it.

Bullet Whiskey didn’t make the greatest first impression when he met Finlay Wilson for the first time. When this big brute of a man’s first words to you are, “Do you wanna take a ride on the Bullet train?”, you might not be the most receptive either. Finlay Wilson is the complete opposite of the women that Bullet is used to. To put it lightly, she is sugar and spice and everything nice while he is used to women who are more of the rough and tumble variety. It is Finlay’s innocence and sweet demeanor that Bullet is fascinated by and when Finlay is hired for a month to re-evaluate and expand their biker bar, sparks more than just fly between them; they practically explode.

The dynamic between Bullet and Finlay is probably one of my favorites to read in romance books. There is just something about a mountain of a man who is crazy intimidating, crass, but also a big softie on the inside and a heroine who is sweet, pure of heart, but still puts the hero in his place that I just absolutely love. While I loved Finlay for her strength and resilience after experiencing heartbreak and tragedy earlier on in her life, it was Bullet who stood out to me the most. He is such a striking character, projecting this image of someone you don’t want to mess with but who also has such a huge heart for the friends and family around him. He goes out of his way to help not only them but anyone who is in need and in turn does not want to be looked upon as a hero for his efforts. Add in his Special Forces background and I was just hooked especially when reading about the struggles he is still working through as a result of his service.

The connection between Bullet and Findlay is electrifying both sexually but also emotionally as you see Bullet slowly learn that he can open up to Finlay about his past and it doesn’t make him any less of the man than he is. And it is the same for Finlay because of her past. Despite Bullet’s dirty mind when she is around him, Finlay is still able to recognize that she can trust Bullet and that he would never do anything to hurt her.

This book was beyond amazing and held my heart in its clutches the entire time. If you like romances with big, broody biker heroes as well as ones with a ton of heart and emotion to them, then pick up Driving Whiskey Wild. And if you enjoy it, be sure to check out the rest of the series too!