It’s time for another blog tour!

I am so excited to be a spot on this book’s blog tour hosted by Tasty Book Tours especially since today is its release day!! Let’s celebrate together the release of this wonderfully adorable book, Irresistibly Yours by Lauren Layne!!

Meet the men of Oxford magazine! In the first captivating spin-off of Lauren Layne’s Sex, Love & Stiletto series, a not-so-friendly battle of the sexes turns into a scorching office romance.

Hotshot sports editor Cole Sharpe has been freelancing for Oxford for years, so when he hears about a staff position opening up, he figures he’s got the inside track. Then his boss drops a bombshell: Cole has competition. Female competition, in the form of a fresh-faced tomboy who can hang with the dudes—and write circles around them, too. Cole usually likes his women flirty and curvy, but he takes a special interest in his skinny, sassy rival, if only to keep an eye on her. And soon, he can’t take his eyes off her.

Penelope Pope knows all too well that she comes off as just one of the guys. Since she’s learned that wanting more usually leads to disappointment, Penelope’s resigned to sitting on the sidelines when it comes to love. So why does Cole make her want to get back in the game? The man is as arrogant as he is handsome. He probably sees her as nothing more than a barrier to his dream job. But when an unexpected kiss turns into a night of irresistible passion, Penelope has to figure out whether they’re just fooling around—or starting something real.

Lauren Layne is a USA Today Bestselling author of contemporary romance. Prior to becoming an author, Lauren worked in e-commerce and web-marketing. In 2011, she and her husband moved from Seattle to New York City, where Lauren decided to pursue a full-time writing career. It took six months to get her first book deal (despite ardent assurances to her husband that it would only take three). Since then, Lauren’s gone on to publish ten books, including the bestselling Stiletto series, with several more on the way in 2015.

Lauren currently lives in Chicago with her husband and spoiled Pomeranian. When not writing, you’ll find her at happy hour, running at a doggedly slow pace, or trying to straighten her naturally curly hair.

To say that Irresistibly Yours is cute is an understatement. Like I said at the beginning of this post, this book was wonderfully adorable and extremely heartwarming. Penelope and Cole’s relationship and how it progressed felt very real and genuine to me despite the circumstances of how their lives collided with one another. And adding the sports element to the book only elevated  it because you could see how much passion both Penelope and Cole had for it, making them obviously perfect for one another.

Penelope Pope is just a little bundle of joy which is very much accurate seeing as Cole gives her the nickname “Tiny” in the first part of the book. She is such a strong, capable women despite her size, going after what she wants with such force that you can’t help but admire her determination. Moving from Chicago to New York City because of Oxford’s sports editor position, taking that risk is an amazing feat for her along with the fact that she did her homework, so to speak, and knows almost everything about the world of sports and the athletes in it. I absolutely loved that Penelope and Cole meet because they are both competing for the position at Oxford because it just provides an amazing example of how a women can take on a male dominated world and make such an impact that she is chosen as a finalist for this highly coveted position. Her positivity and passion is what really shines through throughout the book.

And then there is Cole, who honestly has become one of my new favorite fictional boyfriends purely off the fact that he is so kindhearted and sweet. Yes, he is still a guy especially when he is checking out Penelope at the baseball game before he knew who she really was. But despite the remarks of him being a “ladies man” or “bachelor”, I really fell in love with Cole because of his heart and how he was so giving to Penelope even when she was the one thing standing in the way of him getting his dream job which would provide him with the means to take care of his brother. And then of course, there is the relationship he has with his brother which was so amazing to read considering Bobby’s circumstances (no spoilers, of course). Once you realize the extent of what Cole is doing to provide for his brother and the dependency they have on one another, your heart can’t help but flutter a little bit. All in all, Cole’s caring and loving heart takes center stage and leaving you desperately wanting to take Penelope’s place and have him fall in love with you instead.

The nature and progression of Penelope and Cole’s relationship is also another element that I loved because it was a perfect example of how a man and a women can be friends and comfortable around each other before romantic feelings kick in and take over. The ease and simplicity of their friendship was so great to see in the book because you couldn’t help but smile as they teased one another or talked/argued about sports especially since you knew that the tension building around their interactions was going to lead to something more than friends.

In spite of all that, there were some things about this book that became tiresome after awhile or didn’t play out the way I thought it would. Penelope’s feelings of not be worthy enough for a man like Cole to be interested in her was very much understandable to me because those feelings mimic the ones I have from time to time. They also connect back to that sense of “realness” that can be felt throughout the book allowing you to be able to connect with Penelope as a character. But once we get into the second half of the book, those feelings became redundant to me to the point that I wanted to physically shake Penelope and tell her she is good enough for Cole or any man for that matter and she needs to start acting like it. She does show that strength shortly after but I just thought it could have been dialed back a little bit more. I also expected the ending to be a little more grand in its execution just because their love for one another was so palpable for me but I realized that it again plays more towards that feeling of authenticity that this ending could very much happen in real life.

If you are looking for a romance that is genuine, pulls at your heart strings, and also makes you whole-heartedly fall in love with the characters then I suggest you pick up Irresistibly Yours. It shows you just how amazing it would be to find that person you are comfortable being yourself around but also the one you can call the love of your life. Despite how they met, Penelope and Cole are the perfect example of what it means to find your best friend AND your soulmate which is something truly magical to witness. Go pick up Irresistibly Yours today!! 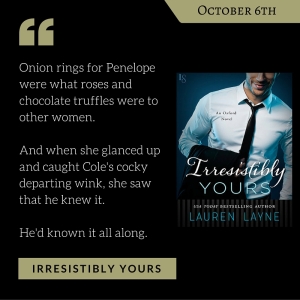 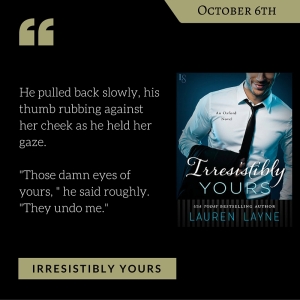 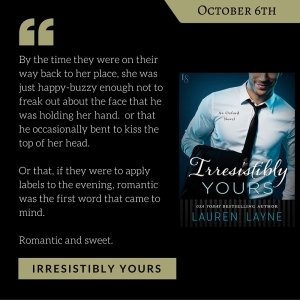 2 thoughts on “Blog Tour: Irresistibly Yours”