Derek West rose from poverty to take the tech world by storm. He’s sexy, confident and gets any woman he wants. And who he wants is Cassie Storm, the rich girl he’s never been good enough for.

She’s desperate to save her family company and there’s only one man who can help. But Derek isn’t interested in helping. He wants to possess both the company and the woman he’s never been able to forget.

His plan? To screw her out of his head. Except once he’s had a taste of Cassie, he doesn’t want to let her go. Her family remembers where he came from, and they won’t allow it. When the truth about their pasts comes to light, though, it may be Cassie who’s going down hard.

Billionaire Kaden Barnes has a reputation for being difficult and always getting his way.

As their passion for each other reaches a boiling point, neither can control the explosive outcome when they finally give in to their desires. He may think he’s calling the shots, but for this bad boy, going down easy has never felt so good. 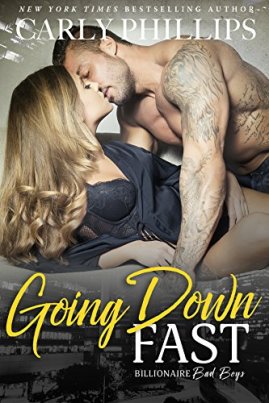 Lucas Monroe dropped out of college only to become a multi-billionaire and tech world God. He can have any woman he desires in his bed, but the only woman he’s ever wanted is off limits and always has been. When Maxie Sullivan finds herself in dire straits, the only man she can turn to is the one she’s always secretly loved: her childhood best friend.  Can they trust their hearts and make a future, or will their complicated pasts stand in the way?

This bad boy is going down fast …

And going down fast has never felt so right.

After a successful fifteen-year career with various New York publishing houses, and over 40 sexy contemporary romance novels published, N.Y. Times and USA Today Bestselling Author Carly Phillips is now an Indie author who writes to her own expectations and that of her readers. She continues the tradition of hot men and strong women and plans to publish many more sizzling stories. Carly lives in Purchase, NY with her family, two nearly adult daughters and two crazy dogs who star on her Facebook Fan Page and website. She’s a writer, a knitter of sorts, a wife, and a mom. In addition, she’s a Twitter and Internet junkie and is always around to interact with her readers. You can find out more about Carly at http://www.carlyphillips.com.

Derek West and Cassie Storm have a past. Once upon a time she was the rich, popular girl and he was the gardener’s son whose parents worked for her and her family. Despite the differences between them, they shared a small, intimate moment the summer before they went off to college that spoke of promise. That is, until it all came crashing down the next day when Derek overheard Cassie and her friends admitting that he may be totally fuckable but he was not the boy you bring home to your parents. Assuming he had seen Cassie’s true colors as the quintessential rich girl and wanting nothing of it, Derek went off to college focusing on his passion for computers instead. Fast forward ten years and Derek West is one third of the billion dollar tech company that created the popular app, Blink. He may have been the gardener’s son in the past but now he is one of the most sought after person in the tech world. And one of those people hoping to get a moment of Derek’s time is none other than Cassie Storm. Oh how the tables have turned.

Cassie has been working her butt off at her family’s company determined to make her late grandfather proud by to become CEO of the company when her father decides to step down. Unfortunately that opportunity is ripped away from her when her father annouces that her brother, who has been jet setting around Europe for the past year and therefore has had no experience working for the family business, is given the presitigious title instead. Heartbroken by the decision, Cassie lets her disappointment and hurt fuel her determination to show her father that she is still worthy by landing THE interview that will make their company’s tech magazine one everyone will be talking about. That coveted interview Cassie desperately needs? You guessed it, Derek West.

Things get a little more difficult when Derek doesn’t initially agree to the interview as he has a firm policy not to let anybody know about his past and how he got to where he is today. Especially when the person asking reminds him vividly of how her family ruined his family’s life. Did I forget to mention that Cassie’s father accused Derek’s mother who was the Storm family’s maid at the time of stealing a diamond necklace and then had her arrested. This lead to the family being fired, thus losing their home and their health insurance, which made things especially hard when Derek’s father got cancer, leaving them unable to get him the care he needed in time resulting in his father’s death. At least that is how Derek has seen it for the past 10 years. But what Derek didn’t bet on is that A) his feelings for Cassie still existed and were still as strong as they were 10 years ago, and B) for him to be wrong about Cassie being the stuck-up rich girl he thought she was all those years ago.

The one thing I loved about this book was how Cassie did not take any of the crap Derek threw at her. Derek still has a lot of resentment and anger towards the Storm family after what happened and there are time when it affects his behavior when he is around Cassie as if he holds her responsible for what her father did. But Cassie doesn’t allow this behavior to stand and on more than one occasion calls Derek out on it and makes it perfectly clear she is not going to stand for it. I absolutely LOVED those moments because it shows you how strong she is as a women especially when she has been proving herself almost her entire life when it comes to her family and their company.

“I’m not giving up on the interview. But you should think about whether or not you want to see me outside of a working relationship. Because I don’t want to deal with the snide remarks and sudden change of temperature when something you don’t like comes up.”

Derek had a lot to work through over the course of this book as he tries to move past his feelings about the Storm family so that it does not interfere with his relationship with Cassie. Then when the truth of the incident that caused his family so much pain, at least in his eyes, comes to light Derek must learn to accept what has happened in the past in order for him to have a future with Cassie. I really enjoyed the journey Derek went on because he had so much loyalty to his family that it blinded him a bit because it allowed for his anger towards the Storm family to remain and grow as he got older. It was this second chance with Cassie that allowed him to not only find love but also learn to accept what has happened in the past and, in a way, forgive those involved.

While there is a lot of emotion in this book, there is also a lot of heat as well so if you are looking for a second chance romance that encompasses both, I definitely suggest you check out Going Down Hard and the other books in this series.