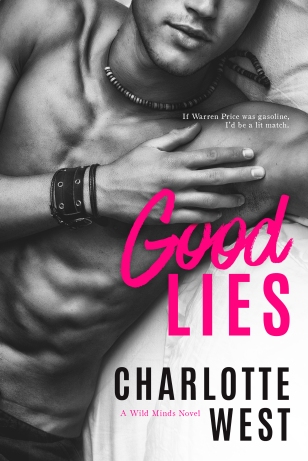 If Warren Price was gasoline, I’d be a lit match.

She’s responsible for the long-standing feud between her father’s band, Wanks and Janks, and younger band Wild Minds. She may or may not have let Wild Minds’ sexy bad-boy lead singer
Warren defile her backstage at a concert. Okay, she totally did.
Secret Two

She’s supposed to be attending college but instead skips town to follow Wild Minds on their European tour. Addy adores Warren Price.

Fast forward a few years and Addy is planning to attend her father’s farewell tour when she hears the news—Wild Minds is back in the good graces of Wanks and Janks. The two bands will be headlining together. This is going to make avoiding Warren difficult. Especially since it seems Warren doesn’t want to be ignored. He also doesn’t want a divorce. That’s right, Addy is married to the Wild Minds front man. Shh. Don’t tell.

What will happen when all Addy’s secrets are revealed? 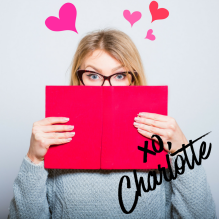 Charlotte West writes romance about strong heroines and the sexy alpha males who love them. She lives in Washington state with her husband and very large dog (think miniature pony size). She spends way too much money on books, and way too much time reading. When she’s not reading, she’s feeding her reality television addiction, eating chocolate, or traveling. She’s been known to consume her weight in Girl Scout cookies.

She has a degree in Science and a Master’s in Education, neither of which she is currently using but is still paying for. Occasionally, she moonlights as a YA author.

The minute I read the blurb for this book I wanted to read it. I mean how can you not read through all of Addison’s secrets especially the last one and not want to starting reading Good Lies immediately. And the cover, which um hi is absolutely GORGEOUS, only made me want to get my hands on this book even more. I should also preface this review by saying this is the first rockstar romance that I have ever read but if there are others that are just as amazing as this one I’m pretty sure rockstar romances will become my new favorite kind of romance to read.

I loved how this book started because it was not how I was expecting it too. In the prologue, you are introduced to Addison when she is a child after she is found by the police because her mother, who left her alone for four days, unfortunately died of an overdose. Addison admits in the prologue that her father, at least she was told, is Billy Wanks, a world famous rockstar. While one of the officers is very skeptical, another officer, Officer Pete, who will become an important person in Addison’s life is more open to the possibility. Within the next few chapters, it is confirmed that Addison is Billy’s kid. Even though he has no idea how to raise a child at the age of 22, Billy takes Addison home and raises her in his rockstar lifestyle until she is about sixteen. That is when Addison first meets Warren Price, her future husband, and things get a little crazy from there.

Switching to present day we find Addison in college, trying to make it on her own in NYC without her father’s money and the attention that comes with it. Everything is going well until her father calls and asks if she could come on the last leg of his tour. Addison is very reluctant to go because her husband and his band are the opening act. Addison and Warren’s relationship is a bit strained, considering Addison left him in Europe with no explanation and then has sent divorce papers for him to sign over the last few years each time getting them back blank. But Addison’s love for her father wins out overall and she decides that this is the perfect way to get Warren to sign the divorce papers once and for all. As if it was going to be that easy lol.

This book was so much more than just a rockstar romance with its quintessential arrogant, I-think-I’m-a-rock-god rockstar. Don’t get me wrong Warren Price fits that bill perfectly, but there was also a lot of angst and emotion. Addison has not lived the most normal life with being abandoned and then swept up into this world of fame and traveling on the road with Billy. Add in Warren and their love story, with Billy disapproving of Warren from day one, and the huge secret of their marriage and you really feel for her throughout the book. Secrets and lies pile up and you know things are going to hit the fan at some point but you also hold out hope for Addison and Warren because through everything they still love each other.

There is a lot going on in this book and because I was hooked from the first page, I think I read this just a tad too fast because I don’t think I was able to connect with what was happening at some points in the book and that through off my paced feeling for the book towards the end. All I know is that I plan on reading this again very soon and that I CAN’T WAIT for Ash and Lily’s story (Warren’s brother and Addison’s best friend).

All I can say is that if you are a fan of rockstar romances, you have to pick this up soon. And if you aren’t that much of a fan, still pick it up because there is some much more to it that just the rockstar aspect.