You can escape a place. But you can’t escape yourself.

Hanna flees the scene of a terrible crime in her native Sligo. If she can just vanish, re-invent herself under a new name, perhaps the police won’t catch up with her. London seems the perfect place to disappear.

Lara has always loved Matthew and imagined a happy married life in Dublin. Then comes the bombshell – Matthew says he wants to join the priesthood. Humiliated and broken-hearted, Lara heads to the most godless place she can find, King’s Road, Chelsea.

Matthew’s twin sister, Noreen, could not be more different from her brother. She does love fiance John, but she also craves sex, parties and fun. Swinging London has it all, but without John, Noreen is about to get way out of her depth.

All three girls find themselves working for Bobby Chevron – one of London’s most feared gangland bosses – and it’s not long before their new lives start to unravel.

Kate Kerrigan lives in County Mayo, Eire, with her husband and children. Her novels include Recipes for a Perfect Marriage, shortlisted for the 2006 Romantic Novel of the Year Award and Ellis Island, which was a TV Book Club Summer Read. 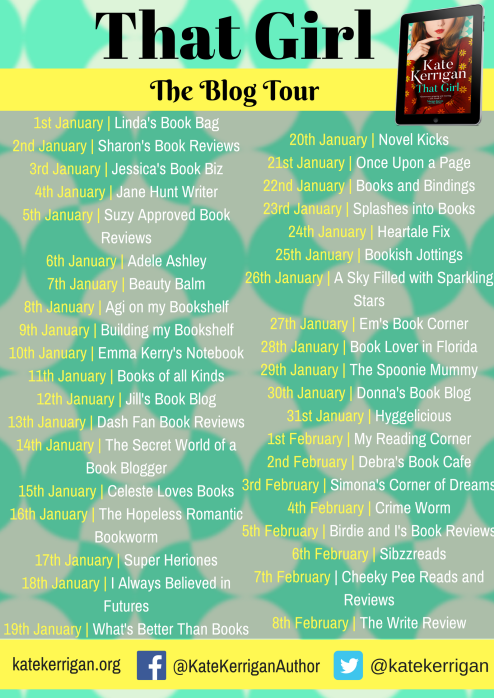 A year passed and Hanna turned from thirteen to fourteen. She became more independent and began to speak her own mind. She was glad that her mother had Dorian to focus on, instead of just her, and she came to trust him. While she knew her stepfather would never be a replacement for the father she so deeply loved, Hanna grew fond of him as time went by. Dorian Black loved her mother, there was no doubt about that, and he made her happy. Hanna also understood that he had been kind and generous regarding her as well. As the nuns pointed out to her in school, ‘It’s not every man would take on another man’s child.’

Dorian never patronised her, or talked to her like she was a poor child, as so many people did since her father died. He treated her as an equal, and she liked that. Dorian allowed her to call him by his first name. When she first did it, her mother tutted, insisting she call him father to show him proper respect. But Dorian had been on Hanna’s side. ‘Don’t push the child, Margaret,’ he said. ‘I am not her natural father. There is no reason she should look on me as such. Hanna is old enough to make up her own mind about the role I play in her life.’

Margaret became worried that Hanna was moving away from her, that she was losing her. Dorian was as wise and reassuring as ever. ‘Hanna is becoming a fine young woman,’ he told her. ‘She is not your little girl any more, Margaret. Sooner or later you’ll have to accept that she’s an adult.’

Margaret pursed her lips and remained silent on the subject. Hanna could tell she didn’t like it but it was important that her mother understood she wasn’t a child any more. Dorian was right, she was becoming a ‘young woman’ and her mother just had to get used to it. United in that understanding, a bond grew between stepfather and stepdaughter that felt to Hanna like friendship, or maybe even love.

Then, as Dorian and Margaret Black were coming up to their second wedding anniversary, Margaret came down with a nasty bout of flu. At first it seemed not to be serious but then her symptoms worsened with lethargy and headaches. Weeks passed and Margaret remained bedridden. With little appetite and no energy to lift herself from the bed, it appeared that there was something more serious underlying the illness. Hanna was worried and asked Dorian if there was anything more they could do. He reassured her that her mother’s recovery was just around the corner.

But Hanna could see that despite all the tinctures and medicine Dorian was administering, Margaret seemed to get worse. One afternoon, when her mother was barely able to open her eyes and smile at her when she came in from school, Hanna asked Dorian if it would be better to move her mother to a hospital. Dorian looked at her, stricken, but also a little annoyed.

‘I know you are worried, and so am I. But she is my wife, Hanna. Nobody can look after her as well as I can. Please,’ he said, his eyes were wide and pleading, ‘trust me. Let me do this. For you. For both of us.’

Hanna could see that this was hard for Dorian. He loved her mother too. Dorian wanted her mother back as much as she did.

So she sat at Margaret’s bedside each evening and prayed for her to wake up. Dorian kept reassuring her that her mother would get better soon. But she was constantly asleep, and seemed to be fading away before Hanna’s eyes.

Every few days she asked, ‘Is there anything I can do?’

‘Just be a good girl,’ Dorian said, ‘and leave your mother to the experts.’ He kissed her forehead, sent her to school each day and told her that everything was going to be all right. Soon her mother would be better and they would be a happy family again.

Other than the gorgeous cover that drew me in from the moment I saw it, I did not know what to expect from That Girl. Then, I read the first three chapters and had to take a small break because all mind kept saying over and over again was “What did I just read?” and “Wow, did that really just happen?”. From there, I was hooked and could not wait to see what else lay ahead.

That Girl centers around three women from Ireland who, each for different reasons, travel to London during the 1960s for a fresh start. Hanna, who becomes Annie Austen, has fled after a terrible crime has been committed, holding tight to her new identity in order to forget her past. Lara comes to London to also escape and start over after her boyfriend, Matthew declares he wants to become a priest stating that even though he loves her, he loves God more. Noreen, Matthew’s twin sister and Lara’s best friend, gets tired of her boring predictable life. Her future is set for her to marry her fiance John and then take over her family’s pub but Noreen wants more she follows Lara to see what Swinging London has to offer.

I honestly don’t know where to start. This book has a little bit of everything to it. It has romance, amazing female friendship, self-discovery, suspense, and much more. While you have the three main characters who all come to live together in London, each of their individual storylines introduces you to a large cast of side characters as well. As the story unfolds you get engrossed into this world, following each of the girl’s on their journeys as Hanna/Annie makes herself a new life, Lara follows her passion in fashion, and Noreen sets out to find the exciting life and independence she didn’t have back in Ireland. And with the backdrop being London in the 1960s, it was just so much fun to just immerse myself and travel back in time. I became just as intrigued about the time period as I did with the story.

The only issue I had while reading this book was the switching of perspectives that happened within the story, sometimes without any indication of who it switched to. In the beginning, you knew who’s perspective you were reading from but as the story goes on and more characters are introduced and the plot becomes much more intricate, it became rather difficult to determine who was speaking from time to time.

Overall, this was such a surprising read and I am so happy I got to read it. Kate Kerrigan did such an amazing job pulling me in from the very beginning and transporting me back to Swinging London. I fell in love with each of the characters until at one point I thought they were real people. If you are looking for a character-driven book with a little bit of everything, then check this book out.

One thought on “Blog Tour + Review: That Girl by Kate Kerrigan”