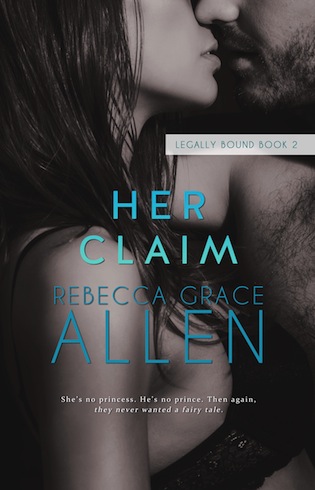 Cassie Allbright takes no prisoners. A half Cuban ball-busting attorney, she’s too tough to admit what she wants in bed. But tough is the only way to cut it in her high-powered firm, and Cassie doesn’t need a knight in shining armor. And she definitely doesn’t need Patrick Dunham—an arrogant, chauvinistic man-whore with a knack for pissing her off.

Bound to the helm of his family’s publishing house, Patrick is shackled to a life of power and wealth he never wanted. Seduction is his only distraction—his nights of pleasure always temporary, because happily-ever-afters are not for him. But while luring a woman into his bed has always come easy, the high-and-mighty Cassie has never succumbed to his charms.

Their verbal sparring turns to foreplay, but instead of scratching an itch, it only whets their appetites. Patrick gives Cassie a taste of what she’s secretly craved, and Cassie’s dark desires stir up things Patrick never knew he wanted. Enchanted, he offers to fulfill her most dangerous fantasies. She agrees, with an iron-clad escape clause: her heart is off-limits, and so is his.

Funny thing about hearts, though. They have a way of ignoring the fine print.

Warning: This book isn’t for the faint of heart. Disclosure includes angry, vying-for-control hate sex and one steamy weekend in Miami. Ready? Break the caution tape and proceed.

Rebecca Grace allen holds a Bachelor of Arts in English with a double concentration in Creative Writing and Literary Comparison as well as of Master of Science degree in Elementary Education, both of which seemed like good ideas at the time. After stumbling through careers in entertainment, publishing, law and teaching, she’s returned to her first love: writing. A self-admitted caffeine addict & gym rat, she currently lives in upstate New York with her husband, two parakeets, and a cat with a very unusual foot fetish.

“I haven’t been able to stop thinking about you,” he said.

Was this still part of the game? It was hard to keep a healthy sense of mistrust in place with his body so close, his breath heated as he kissed her neck.

“Since last week?” she asked.

“Yes.” He kissed her again, grazing the back of her neck before moving to the other side. Cassie shuddered at the feel of his warm skin and beard. “No.”

“You want to clarify that?”

“Longer. Since the night we met. You had on a white blouse with a black jacket and a matching skirt, and I wanted to rip it all off you.”

“You remember what I was wearing?”

It shouldn’t have made her so happy to hear that, but fuck it. If she were being honest with herself, she’d wanted him that long too.

She reached back to touch him, one hand on his cheek, the other gripping his pants, tugging him closer. “I don’t remember what you wore, but I do know you were off in a corner, flirting with some chick I thought was your girlfriend.”

“I was being Jack’s wingman. Trying to get him out there again.”

“You left with her.”

“Semantics.” He bit down on the tender skin of her neck. Cassie inhaled sharply.

“I know.” He went for the back of her dress, leisurely drawing the zipper down. “You were so mad. So obnoxious once you decided what kind of man I was.”

Cassie’s pulse raced as the dress slipped to the floor. “I think I made some kind of comment about you running out of options at your age.”

“And you enjoyed that?”

“Fuck yeah. It gave me a reason to piss you off right back.”

He helped her step out of the dress and urged her forward, fingers wrapped around her waist as he turned her around, then shoved her backward until her hips hit the wall. Cassie’s breath caught at the forbidden thrill.

Cassie nodded. She did. More than she knew how to say.

She hoped he’d trap her there, that she’d get to feel that implacable grip even more tightly, but he moved in and kissed her roughly instead. When he bit down on her lower lip and sucked it into his mouth, Cassie hissed and gazed up at him. His eyes were open too, and he was smiling around his bite, mirth in his eyes as he let go and pulled back.

Roughness. Aggression. That was what she liked. “I might.”

“I picked that up last time.” There was meanness to his expression, a taunting, sinister flash in his eyes. “I wish you’d told me beforehand, but I guess that’s going to be part of the fun with us, isn’t it?”

“Finding the right button to push.” Shifting to her side, Patrick palmed her belly. His hand dipped down until his fingers teased the edge of her panties. “Then pushing it harder.”