I am beyond excited to be doing another blog tour for Melissa Foster because she has quickly become one of my new favorite authors.

The vast world she has created in this series along with some of her other series are just wonderful and really pull at my heart strings because they take place on Cape Cod which has always been a part of my life as I have family who live there, I lived there for a summer, and of course my family vacations there every summer.

It was great to set back into this world and read about Grayson and Parker’s story which I can only describe as swoon-worthy, adorable, and steamy 🙂 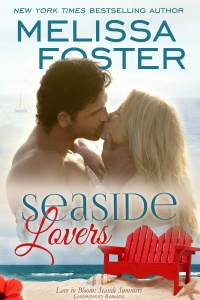 After months of long-distance communication, actress Parker Collins and artist Grayson Lacroux finally plan to reconnect in the seaside town of Wellfleet, Massachusetts. But Parker never shows, and weeks pass without a word, leaving Grayson to believe he’s misinterpreted their budding relationship.

Parker has been running on autopilot ever since she lost her friend, mentor, and the only family she’s ever known, Bert Stein. Armed with junk food, tequila, and her big, lovable dog, she’s prepared to hole up and mourn—and determined to mend a fence Bert had never been able to with his estranged and bitter brother. But Parker didn’t count on the sinfully hot artist she’s been fantasizing about for nearly a year walking in on her grief-induced drunken night.

When Grayson stumbles across Parker, he has no idea what to make of the gorgeous blonde who blew him off despite the heat sizzling between them. But that doesn’t stop him from feeling protective of the woman who’s consumed his thoughts for months, and when he learns of Parker’s plans to confront an angry old man, he refuses to leave her side. As Parker’s past unfolds, they’re led on an unexpected journey of discovery. Their connection deepens, and late-night fantasies become passionate realities, until good intentions spark painful secrets, threatening the love they’ve found. 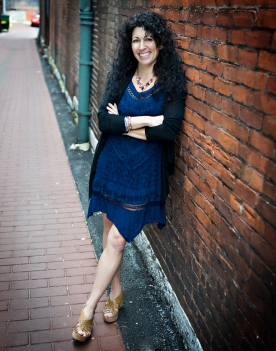 Now this may sound strange to some people but the way Grayson and Parker began their relationship, emailing each other back and forth about the drawings that Grayson had come up with for Parker’s foundation while also getting to know one another and therefore developing feelings for one another is exactly how I pictured two people falling for each other when I was younger. Truth be told I still think that, and even though the long distance was obviously an obstacle, there is something about them learning about one another through the emails they sent to one another that sounds incredibly romantic. Of course, both tried to remain professional but that soon fell at the wayside as both began to fall for one another despite the fact that they did not know if these feelings that were forming would be reciprocate when they planned on meeting in person.

Unfortunately, life got in the way as tragedy struck and Parker unexpectedly lost the one person in this world that was her family, Bert Stein. Parker grew up in foster care, shuffling from house to house before she met Bert who became not only her family but helped her launch her career as an actress. Therefore, when Parker learned that he passed away while shooting a film, the only appropriate thing for her to do in order to deal with her grief was to return to Wellfleet and basically become a hermit as she shut out the rest of the world and Grayson along with it. It is after two weeks of radio silence that fate decided to step in as Parker and Grayson finally meet. To say that the meeting is unprofessional is an understatement as Grayson happens upon Parker who is holed up in her house after believing that someone has broken in. Instead he finds Parker who has decided that tequila, candy, and horror movies are exactly what you need when dealing with the death of the only family you ever had. It is through this hilariously adorable first scene that you are able to see the spark between these two despite only having a relationship via email for the last ten months.

The downside to having their relationship be over email for the first ten months is that we did not see the beginnings of their relationship unfold so when they do meet and begin to get together it feels rather fast. I had to remind myself several times of their previous email correspondence so as to not just immediately write this off as insta-love. It is because of this that my investment in their relationship took a little bit of time but it was well worth it because Grayson  and Parker did not let me down. I was able to connect with Parker a lot faster than with Grayson, but after Grayson stands up to Abe, Bert’s brother, who Parker tries to reconcile with I soon began to swoon. The swooning continued as things started to heat up between Grayson and Parker whose passion for one another came with a side of cuteness. While I obviously believed they were attracted to one another, their more steamy moments had an air of tameness to them allowing for the cuteness factor to come through. It was a small moment between Grayson and Parker when Grayson was watching Parker as she read the script she had received for a rom-com that got me hook, line, and sinker because it is exactly the thing I hope for when I find the person I am going to fall in love with. Add in the fact that it takes place on Cape Cod and you have one happy reader :).

If you are looking for a swoon-worthy romance that is both realistic and adorably cute, then you need to pick up Seaside Lovers and then make your way through the rest of Melissa Foster’s books. You will not regret it, I promise!!