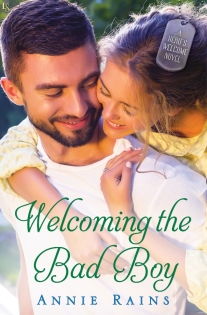 From the bestselling author of Welcome to Forever (“Full of heart and emotion!”—Lori Wilde) comes a sweet, sexy novel about breaking all the rules. In Seaside, North Carolina, the boys on the base are heroes—but that doesn’t mean they’re always well-behaved.

As a preacher’s daughter, Valerie Hunt only dates the very respectable, very boring men who meet her father’s strict standards. In private, however, she leads a double life as a romance writer of steamy stories about the least respectable sorts of men. Valerie has always kept her hottest fantasies separate from her real life, but when she nearly runs a hot-blooded biker off the road, the lines begin to blur.

Even though Valerie almost killed him, Griffin Black can’t be angry after he learns the reason for her distracted driving: an unruly puppy belonging to her ailing friend. As a member of the military police K-9 unit, Griffin insists on training the dog himself. But he soon wonders how he’s ever going to stay disciplined around the most alluring, down-to-earth, and totally unattainable woman he’s ever met. Valerie is the ultimate good girl. And Griffin is going to need all his old tricks to unleash her wild side. 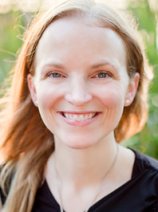 Annie Rains is a contemporary romance author who writes
small town love stories set in fictional towns on the coast of North Carolina. Raised in one of America’s largest military communities, Annie often features heroes who fight for their countries, while also fighting for a place to call home and a good woman to love. When Annie isn’t writing, she’s spending time with her husband and 3 children, or reading a book by one of her favorite authors.

Boy, did my heart flutter numerous times while reading this book. I mean you have the quintessential “good girl” meets “bad boy”but Annie Rains definitely ups the cuteness factor by adding dogs into the mix as well as tons of emotion as you watch Griffin try and adapt to his mother and who she is after being diagnosed with early onset Alzheimer’s. On top of that, Val who is suppose to be our “good girl” as she is the daughter of a respectable preacher secretly writes romance novels under a pen name. As someone who has dreams of writing her own romance novel one day and who also has seen what Alzheimer’s can do to someone they love, this book was giving me all the feels.

This is my first Annie Rains’s book so I was not too familiar to the world she had created in this series. Despite the initial confusion on who the secondary characters were and how they fit within the story, I really enjoyed stepping into this world where there is a military community at its center. It has been a while since I have read a romance where the military is present so it was great to step back into it especially since it was in a more contemporary setting as opposed to the more suspenseful books I have read in the past.Our first look at this military community is through Griffin and his job as a military K-9 officer. I absolutely loved that Griffin worked alongside dogs and that he felt and cared so much for the dogs he worked with as well as his own dog Trooper who was with him when he himself was in the military. The dog element, both with Griffin and Val, just gave the book a heart-warming feel to it especially since it is because of a dog that they had their first interaction with one another. The cute aspect of their “meet-cute” moment goes to the dog that Val is looking after, Sweet Cheeks, but the moment is anything but given the fact that Val almost ran Griffin off the road. Griffin, in turn, decides to let his feelings of Val not taking the time to train the dog properly influence his impression of her. It is only until after Val confronts him for his behavior that Griffin  learns she is only looking after the dog for Alma, an elderly women recovering from hip surgery in the nursing home where Val volunteers and where Griffin’s mother now lives.

Though they have their differences, Val being the “good girl” as a preacher’s daughter who volunteers reading to the elderly women at the nursing home and Griffin being the “bad boy” who has tattoos and rides a motorcycle, they also have a few similarities that allow them to slowly get to know one another. A dog causes them to meet but it is the nursing home that also plays a role in the beginnings of their relationship especially since Griffin’s mother is part of the book club that Val runs. The fact that Val volunteers her time reading to these women because of the connection she has to reading seeing as it inspired her to become a writer was absolutely wonderful. Val’s beliefs on reading and her secret life as a romance writer is what truly connected me to her character. She brings such joy to these women’s lives even if Griffin whose mother seems to enjoy the bookclub knows this is not who his mother once was. Griffin’s issue with the bookclub and how it is changing the mother he once knew is just one example of his struggle dealing with the fact that his mother has Alzheimer’s. This once respected academic who wouldn’t be caught dead listening to a romance novel before her diagnosis is who he wants back more than anything in the world. Given the fact that my grandmother had Alzheimer’s and that I slowly watched her disappear in front of my eyes when I visited her, I know exactly how Griffin felt and understood his pain as well as the frustration he experienced. It is this aspect of the novel that really pulled on my heart strings.

There is so much that I connected to and felt when reading this novel which was surprising because it took me a few chapters for me to get into it initially. But despite that, it was the emotion and heart-warming moments that reeled me in getting me ready for the passion just below the surface. I really enjoyed this book and hope to read more of Annie Rains in the future.

One thought on “Welcoming the Bad Boy Blog Tour”